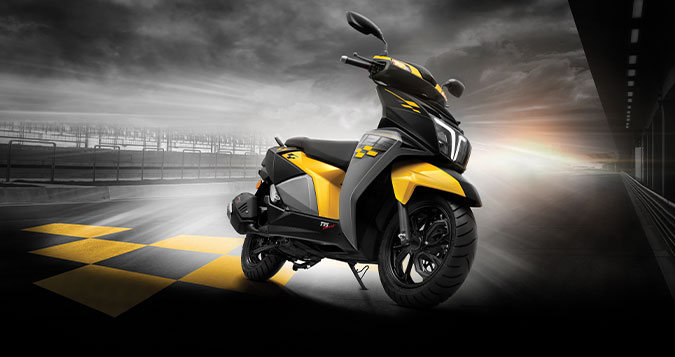 Mostly targeted at the younger generation, the Ntorq scooters are not just great for those who will use it for daily commutes but also for those who enjoy the thrill and excitement the scooter offers. It looks heavy, and it is heavy–with a kerb weight measuring 118 kg; that being said, it presents a perfect balance of sportiness and practicality. The Ntroq Race Edition sees no changes to the body panel, but still gives off a youthful and energetic feel with the newly featured design elements: a striking face with an LED headlamp and LED T-shaped DRL; a glossy black nose, and a glossy black fly screen with a smart connect logo; and a dual-tone colour scheme with a 3D logo and checkered flag graphics.

Powering the Ntorq Race Edition is the same 124.8cc single-cylinder three-valve engine that generates a maximum power of 9.4 hp and a maximum torque of 10.5 Nm. Unsurprisingly, it comes with a BS6 compliant engine, and a fueling system whose carburettor is replaced by Race-Tuned Fuel Injection (RT Fi). The front and rear wheels get a disc brake and a drum brake, respectively. The front suspension features telescopic suspension with hydraulic dampers, and the rear suspension is a coil spring with hydraulic dampers.

The SmartXonnect feature (Bluetooth-connectivity for smartphone pairing) isn’t something new–the standard Ntorq 125 was the first scooter in Nepal with this feature–and the dynamic fully digital instrument console shows various features such as clock, average speed, top speed recorder, lap timer, etc. Similarly, the carbon fibre seat cover also enhances the scooter’s racing identity. The 22-litre boot space has a light and USB port inside, and it can fit in a full-size helmet. The fuel cap is placed between the grab rails and unlocks via the same key for the underseat storage compartment.

The colour options for the all-new Ntorq 125 Race Edition are Race Edition Red and Race Edition Yellow. It also features two riding modes: Street and Sport. The dimensions of the scooter measure 1861 mm in length, 710 mm in width, and 1164 mm in height. It can achieve a top speed of 95 kmph, and the company says that it provides city mileage of 51.54 kmpl and highway mileage of 56.23 kmpl. Similarly, the 1285 mm wheelbase is relatively bigger than those on its competitors–the Suzuki Burgman Street 125 and the BS6 Honda Grazia–and the ground clearance is 155 mm. Finally, the fuel tank capacity has been expanded by 0.8 litres, and it now stands at 5.8 litres.

If you are searching for a second-hand scooter in Nepal, visit hamrobazar.