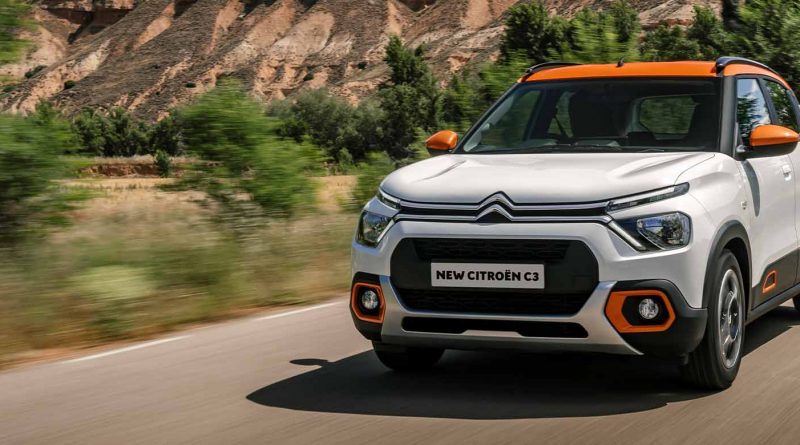 Citroen, the French automobile brand, is readying to launch the C3 in India on July 20. The C3 will be the company’s first India-based model to manufacture in its Tamil Nadu manufacturing facility and it will be the entry-level model next to the C5 Aircross.

Citroen C3 showcases its lofty front with sleek lines along with a spit headlamp and Y-shaped LED DRLs. The floating roof is supported by a black windshield pillar in the side profile. The front and the rear wings have extensive curves, highlighted by the large wheel arches.

Inside the 5-seater hatchback, we can get a 10-inch infotainment system compatible with both Apple car play and android auto. The C3 gives the impression of the interior space. Even though the boot capacity of the C3 is 315 litres the car gets decent room space because of its wheelbase.

The C3 will be offered in four colours including Platinum Grey, Polar White, Steel Grey, and Zesty Orange. Additionally, the customers will also have the choice of a dual-tone roof, which will be either Platinum Grey or Zesty Orange.

Citroen has not yet revealed the pricing details of the C3, which is set to launch in India on July 20. However, the expected price of the hatchback is INR 8-12 lakh. In Nepal, fans can expect it to cost around Rs 30-32 lakh.

Shangrila Motors might showcase the hatchback in the upcoming NADA Auto Show 2022 which will take place from August 23 to 28 at Bhrikuti Mandap Exhibition Hall.

There are several possibilities for second-hand vehicles in Nepal if you visit the hamrobazar website.