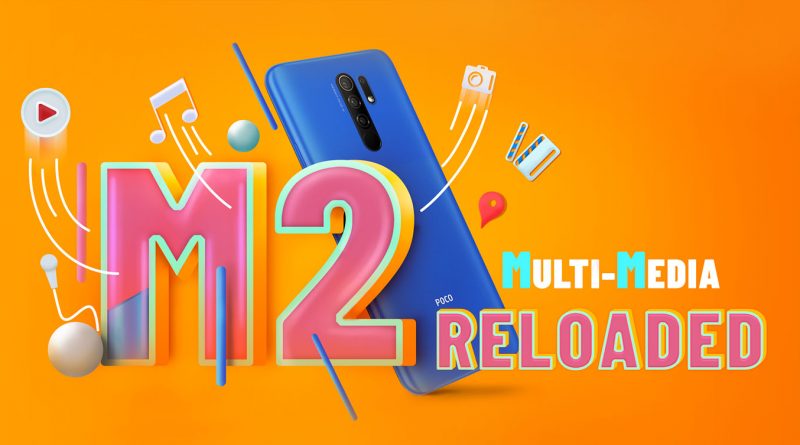 Poco launched the M2 last year with the same specs as the Redmi 9, and the company has yet again released another model similar to the M2–the Poco M2 Reloaded. The reloaded version has launched in Nepal and it brings a minor difference of storage configuration to its sibling. Let’s get to know the full details of the Poco M2 Reloaded.

The Poco M2 Reloaded edition looks exactly the same as the Poco M2. The rear of the device has two pill-shaped camera housing–one bigger than the other–along with the fingerprint scanner integrated into it. Near the bottom, there is a Poco branding, and the rear features a dual-tone finish with an anti-fingerprint texture. The right side of the phone gets volume rockers and a power button, while the left side of the phone has a sim card tray mounted with a dedicated memory card slot. The buttom of the phone has a speaker grille, USB Type-C charging port, microphone, and a 3.5 mm headphone jack. And finally, the top of the phone has a microphone.

The Reloaded edition gets a 6.53-inch IPS panel that has Low Blue light certification from TUV Rheinland and with an FHD+ resolution of 1080 x 2340 pixels. The display is protected by Corning Gorilla Glass 3. The screen has a brightness of 400 nits; the aspect ratio is 19.5:9; the screen-to-body ratio is 83.2%; and it has 375 ppi density. The screen has a considerable ratio of bezels for the price range, and on the top, it has a waterdrop notch for the selfie camera.

The Poco M2 Reloaded is powered by MediaTek’s gaming-centric Helio G80 chipset that has two Cortex-A75 cores at 2.0GHz paired with six Cortex-A55 cores at 1.8GHz. While it is claimed to be gaming-centric, the phone should only be able to handle minor games. Similarly, the phone’s graphics are taken care of by Mali G52 GPU. The phone gets either 6GB of RAM and 64GB of storage variant or 6GB of RAM and 128GB of storage option. The phone runs on MIUI 11 based on Andriod 10.

The machine is packed with a massive 5000mAh battery for long hours of usage (can last up to one and a half days), and for charging the device, the company offers an 18W fast charging option. The phone comes with P2i certification against minor splash and rust. It also has a fingerprint scanner and a face-unlock feature to unlock the device, which is quite responsive. Connectivity options on the Reloaded version include Wi-Fi 802.11 a/b/g/n/ac, GPS, Bluetooth v5.00, Infrared, USB Type-C, FM radio, 3G, and 4G. Sensors on the phone include an accelerometer, ambient light sensor, proximity sensor, and fingerprint sensor.